Mathew Stone of Pirate Island Motorcycle Parts has expanded his niche dynamic motorcycle parts business within six months of securing his first industrial unit at the NEC. Pirate Island Motorcycle Parts which is also known as P.I.M.P has gone from to strength to strength since relocating his business to the Network Enterprise Complex. This was a another big move for the motorcycle parts company with quite an element of risk involved so to reduce that risk we came up with a bespoke package which enabled Mathew to occupy the adjoining unit at a reduced rate to make his vision a reality. We mutually agreed that if after six months his ambitions weren't realised he had the option to simply walk away and hand the unit back without the fear of being tied into any lengthy contract.

In that time his company has now employed a further member of staff and has achieved the accreditation he was striving for to move his business forward into the modern super bike market arena as well as the classic and vintage market the company currently caters for adding further strings to his bow securing future sustainability. 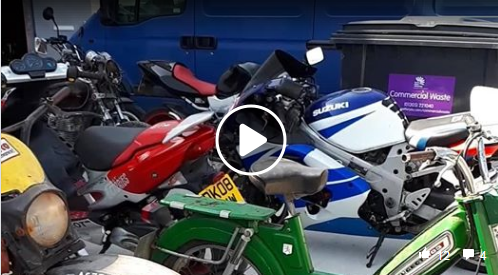 Mathew stated " I was itching to expand, taking on an additional unit doubling our size was a big step for us, it made practical sense as the unit is just next door. I discussed my business plan in great detail with Calvin at the business hub and he was as enthusiastic on the idea as I was and with what I had planned it should work. Six months on and so far so good, i'm now investing in another mezzanine floor, replicating my first unit which doubles my floor space to accommodate more stock making us super efficient and still leaving us with the option to have an MOT testing station on the ground floor, it's all working out very well and I've now signed up to five years on both units, it really is exciting times."

Calvin Samways the Business and Enterprise Director said "I'm really pleased with how it's turned out for Mathew, it's taken a lot of hard work with dedication and commitment to make his expansion a success and we've rooted for him every step of the way, it takes a lot of belief in your product or service and courage to do what Mathew has achieved and long may it continue for him."